I started my mission to scout wedding Ranko years ago. A limited SSR out of my reach for the longest time with yearly reruns on my birthday to taunt me, I figured out a foolproof plan. Spark her. Thanks to the memorial gatcha consisting of limited SSR cards that ran from 2015/mid-2016 in Starlight Stage, I could finally put my plan into action. 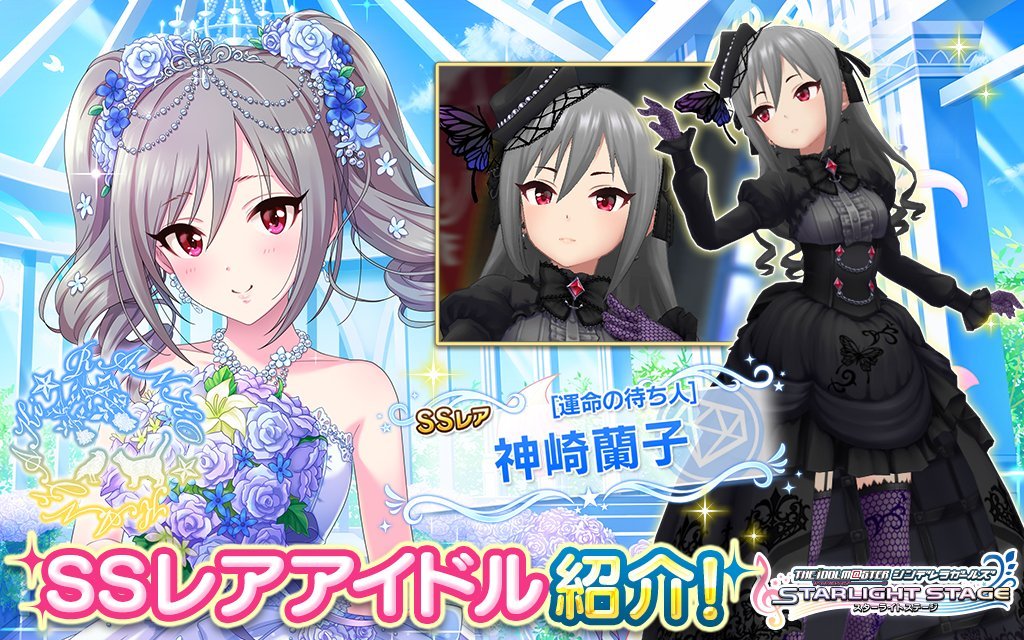 Ranko Kanzaki has been one of my favorite characters for years, and it was finally my time to shine and get her limited SSR. I mean just look at her. An alternate hairstyle, a pretty dress? What’s not to love?

My journey began seven months ago. I had a plan. As soon as the memorial gatcha was available, I started scouting in it. These new SSRs? Who needs em! I had a Ranko to get, and nothing was getting in my way. But nothing happened until the following month.

Noted earlier in my luck post, I got two copies of limited Shiki along limited Minami. A pleasant surprise three ten pulls into my sparking journey, I was excited to have some new cards.

One thing I’ve realized recently is that when you play these games for so long, you hope to get cards of characters you don’t have SSRs for. I mean, it’s cool to have a few different outfits for the same girl. However, I have a lot of useful SR cards with no costumes except the generic dresses that I don’t use since they stick out to me in MVs. So I definitely crossed my fingers for any SSR in this box for just to have new outfits for them.

The scouting process was slow. A lot of 1 SR pulls. The bane of every producer’s existence. At one point I saved all these just to tell myself to keep going. It’s what you don’t see when people post their lucky scouts with two or three SSRs on twitter.

Somewhere along the line I got limited Fumika, though I have no memory of scouting her. I had her lim on an alt account I forgot about on my old phone (rest in peace pixel XL with a broken speaker) so I was happy to have her on my main account now.  Sadly I left her in my present box for months before finding her writing this post for some screenshots (along with SSR Clarice from when I accidentally scouted in the non-lim box).

Minami in the background taunting me.

I really love characters that immerse themselves in literature, so finally setting Fumika free into the library was liberating for her.

Shortly after Fumika, I got a surprise.

Ranko was not going to let me down this time. I was so flabbergasted I got her that I didn’t even screenshot getting the card. I was barely seven pulls in and suddenly her signature popped up. JESUS! I wanted to scream and be happy and take a million screenshots, but I still didn’t believe I actually pulled her.

So was my journey over? Who did I even need anyway? I got the fabled limited Ranko SSR I had wanted for years. This was in December of 2019, so she felt like an early Christmas present. My journey was over.

My journey was far from over. I was now sparking for limited Nana. A card I admired for years that I never got, she was another white whale. Limited Nana had goofy rabbit ears and a cute outfit. I absolutely needed her since her permanent SSR was a plain letdown in comparison.

Except I got her on my pull after Ranko in my friend’s car after getting chipotle one day. I couldn’t believe this one either but I fumbled to take the screenshot.

With my top two SSRs off the list to spark for, I was in too deep. I was eight ten pulls in and almost the third of the way to a spark. Who would I spark now? Who knows.

*insert a picture of a confused anime girl here*

I got another copy of Shiki and (sparkly, animated) Minami along the way. The loading bar for that scout was lightning fast so I knew the SSR envelope would only give me dupes, so at least I was prepared.

To be honest, the journey between 8 scouts up to the 30 needed to spark was discouraging. Full of 1 SR scouts, I returned to my ways of wondering why I was doing this when I could be pulling for fresh new 2020 limited cards instead of 2016’s old limited SSRs. Thankfully the game gave out a ton of free scouts around the holidays, so it wasn’t hard to reach the spark even though the odds were not in my favor when it came to SSRs.

My second to last ten pull before hitting 300 gave me Natsuki. Finally, someone new! I was shocked once again it wasn’t a dupe of Minami or Shiki.

I was finally at the home stretch. I skipped through the last pull. It was nothing of value, but it was finally time. Every producer’s dream.

I sat for a few days on the spark. I didn’t know who to choose. I didn’t want to make a rash decision and end up with an SSR that I would regret.

But before that, I did the paid gatcha just to be safe. I had hit player level 100 what felt like eons ago and skipped over the paid SSR boxes. It cost about five dollars in really money to scout in them for a guaranteed SSR.  Besides, the level 100+ had lims in it and by god I didn’t want to spark someone then do a paid pull and get the same card. That’d be stupid, right?

To be completely honest doing the level 100 paid gatcha, I feared that I would get a dupe. If I got another Minami I was going to be pissed. Which is why I didn’t scout on April first, because that would have just added insult to injury.

By this point in time I had multiple copies of lim Shiki and Minami, and I really didn’t want another one. I was relieved to get Akane, who for the longest time only had a limited card back in the day. I love the background of this card! I wasn’t let down at all. Besides, this was supposed to help me pick a lim I wanted to spark.

After somehow getting almost every card I wanted out of the box, I was still at a loss who to spark. I know, I know. It sounds like such a first world problem. I was torn. Arisu seemed like one of the lims I wanted so badly years ago, but I knew she got a newer SSR last year in an alice dress that I knew I would scout eventually making her limited SSR useless. Takumi had better cards. Momoka’s lim didn’t wow me. I had cinfest Miria, and limited Mizuki looking like a baby in that dress was hands down one of the worst cards in the game that I wouldn’t even take for free. I had cinfest Anzu and Kirari. My choices were slim.

The infamous limited onsen cards for Chieri and Rina tempted me due to their scarcity, but I really wasn’t a huge fan of either of those characters.

But they were never supposed to come back! You say. They’re a part of this game’s history!

So I went with a character on the back burner. Don’t get me wrong. I like her, but not enough to stan her. I have two figures of her, a keychain, and she’s even on my banapass I use religiously when I go to play Wacca at the arcade. It was finally time to give her the attention she deserved.

Pulled on April second of this year, I am absolutely not disappointed with my spark. Despite my extensive collection of Kanako goods in the real world, I had nothing of her in the game itself. What an absolutely stunning outfit! To say I gained a new appreciation for her was an understatement. I’m happy to have Kanako on my account now. She’s even one of the strongest cards on my team, how about that?

I’ll probably do this all over again when the next year’s lims are put into a box, so stay tuned! My prediction for my spark is Halloween Syoko, but who knows what will happen!

One thought on “Sparking a Lim in Starlight Stage”